How the park went from weedy to wonderful

It was the effect of a “perfect storm” of community cooperation that created
a place devoted to educational and recreational purposes.

Welcome to a Magical Place

In the fall of 2006, a group of four citizens met with a representative from the Quaker Valley School District (QVSD) in a construction trailer at the Osborne school. They discussed returning a three-acre overgrown site, adjacent to the elementary school, to its naturalized state. The QVSD leased the land, once owned by the internationally acclaimed author, Mary Roberts Rinehart, to the park to be used for educational and recreational purposes. In early 2007, the Osborne Trail and Park Association (OTPA) was established as a non-profit 501(c)(3) corporation to develop and manage the park.

The park project intrigued the community. Local residents, non-profit organizations and businesses engaged as volunteers. QVSD removed invasive trees, supplied materials for the entrance road and laid a water source. A local road contractor created the stone path into the park. A generous neighbor built the amphitheater and stone benches, designing it and moving tons of rock himself. The trail was laid.

OTPA received grants from the Child Health Association of Sewickley, the Garden Club of Allegheny County, the Sewickley Civic Garden Council, the Pennsylvania Department of Community and Economic Development and private donors.

By early 2008, the OTPA Board named the park the Mary Roberts Rinehart Nature Park. The entrance sign design was inspired by two little girls who delighted in stories of woodland fairies. 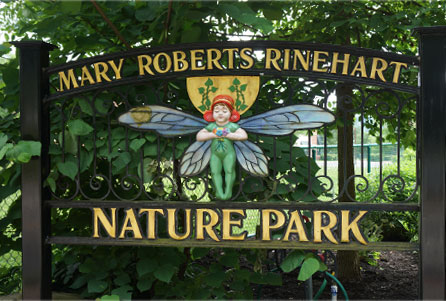 With a goal of utilizing and showcasing Appalachian native plants, more than 100 trees and shrubs, and 1,000 perennials were planted in 2008. Three hand-hewn picnic tables and benches were purchased. The Park is set to become the best example of naturalized plantings in Western Pennsylvania.

“Sewickley Serenity: The Mary Roberts Rinehart Nature Park offers beauty, tranquility and education to its visitors of all ages.” Read the article in the IN Sewickley Magazine.

OTPA is a tax exempt and non-profit organization comprised of local citizens. It was established in 2006 to develop and manage the park.

Thank You to Our
Wonderful Donors

WALKS FOR ALL SEASONS
THE PARK
PARK PROJECTS